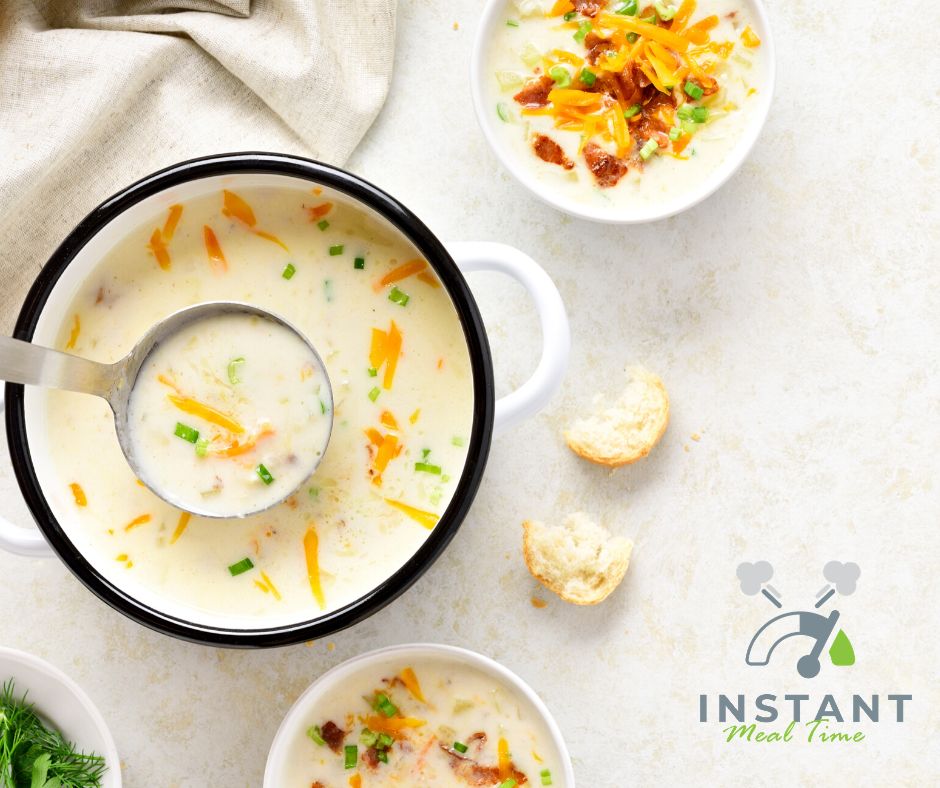 Instant Pot Loaded potato soup is the perfect choice on a chilly day, especially here in Chicago. I live off of potatoes all year. The great thing about this soup is that your potatoes can cook so fast in your Instant Pot. I could never go back to cooking potatoes the traditional way after using my Instant Pot.

Because the first step involved with this Instant Pot Loaded potato soup is cooking your potatoes, first know that you can use whatever potatoes you like. I prefer to use yellow potatoes, but red Russet potatoes or any other similar potatoes will do just fine. I know we all have our favorite kinds of potatoes.

Some choose to leave the skin on the potatoes for Instant Pot loaded baked potato soup. I personally don’t care either way. However, my significant other is quite picky so I peel the skin off after a good scrub down. Russet potatoes, of course, should always be peeled as they come with quite a bit of dirt and tend to have tougher skin.

You’re going to want to first cook the potatoes, then take them out. Next, sautée your chopped bacon and leeks. Then, make a traditional butter and flour roux. I know cooking the potatoes first seems a bit counterintuitive, but doing this will make for a tastier soup. To make a roux, you melt the butter with small amounts of flour, adding as you whisk. You’ll want a creamy base that will eventually thicken your soup.

After those initial steps is when you will add your milk. A note about milk: I prefer to do a mix of one half  half and half and one half of 1% milk and then the Better Than Bouillion, but you can choose any consistency you like and go from there. Additionally, if milk isn’t your thing, try doing this with unflavored almond milk or oat milk. Beware, though, you may get a different consistency. Don’t say I didn’t warn you. You’re going to have your Instant Pot on the sauté setting to heat everything so it bubbles and thickens up.

To get the best consistency out of your potatoes, before adding them mash them up on a separate bowl. You don’t have to do a fine mash, so choose how thick you want your potatoes to be before mashing away. If you want a more chunky consistency, try cutting your potatoes into cubes instead.

This Instant Pot Loaded potato soup is as close as you can get to Instant Pot Panera Potato Soup for what I do next. The final step is adding in all your loaded bits of the Instant Pot loaded baked potato soup. Add in your grated cheese, cream cheese, sour cream, green onions, and bacon (if you decided to use bits or cook separately). Be sure to add in the cream cheese and sour cream, stirring in a little at a time, so the soup does not separate.

You will get around 4-5 servings out of this soup. You can always freeze it in portions and take it out as you please. I use these Souper cubes to freeze my soups. If not freezing, it should keep for about 5-6 days.

Looking for a Good Instant Pot?

You could make this in an Instant Pot model you prefer. I made mine in my Instant Pot Duo. Some prefer the safer versions of the Instant Pot, such as the Instant Pot Ultra. Check out my reviews when deciding between one or the other, and you should get a good idea of what works best for you. Try any of my other recipes with your Instant Pot, too! Happy Cooking!

by admin
Cuisine Soup
This is an easier soup to make in half the amount of time as normal soups. For Instant Pot Loaded potato soup you can make this soup with any kind of potato, adjust the ingredients as needed, and come out with rich and creamy loaded baked potato soup.
Prep Time
15 minutes
Cook Time
10 minutes
Total Time
25 minutes
Rate this recipe
|
0 ratings

link to Instant Pot Pad Thai in 20 Minutes (or Less!)

Instant Pot Pad Thai in 20 Minutes (Or Less!) Asian cuisine is one of the most popular in the world, and for good reason! Pad Thai is my favorite of all time. It's full of flavor and spices that...

Air Fryer Asparagus with Lemon and Parmesan Asparagus in the air fryer? Yes, asparagus can be cooked using an air fryer. This is an excellent alternative to traditional cooking methods because it...

This site is a participant in the Amazon Services LLC Associates Program, an affiliate advertising program designed to provide a means for sites to earn advertising fees by advertising and linking to Amazon.com. We are compensated for referring traffic and business to Amazon and other companies linked to on this site.